Editor's note: This interview includes a discussion of rape and sexual abuse

Activist Tarana Burke, the founder of the "Me Too" movement, sees a stark contrast in the timeline of Weinstein's case and that of R&B singer R. Kelly, who dodged accusations for more than 25 years before finally being convicted on Sept. 28 of sexual exploitation of a child, bribery, racketeering and sex trafficking.

"We are socialized to respond to the vulnerability of white women, and it's a truth that is hard for some people to look in the face, and they feel uncomfortable when I say things like that," she says. "But it is true. ... [There's a] stark difference in what it takes to get attention around Black women and girls."

Burke has spent decades listening to Black and minority communities. She originated the phrase and concept of "Me Too" in 2006 as a way for victims of sexual violence to share their stories and connect with others.

We are socialized to respond to the vulnerability of white women, and it's a truth that is hard for some people to look in the face, and they feel uncomfortable when I say things like that. But it is true. ... [There's a] stark difference in what it takes to get attention around Black women and girls."

In 2017, when the #MeToo hashtag went viral in response to the Weinstein allegations, Burke worried that her work would be erased. She was also concerned that the women telling their stories on the internet were opening themselves up to harm.

"I thought, God, these people are going to cut and bleed all over the internet, which is the very worst place to be exposed and vulnerable in this moment," she says.

But as she read the #MeToo stories women were sharing, she was blown away. Burke shifted her perspective to the "30,000 foot view," and saw something much bigger than she had ever imagined unfolding. She also realized that in order to fully help women heal, she needed to tell her own "Me Too" story. She does that in the new memoir, Unbound: My Story of Liberation and the Birth of the Me Too Movement.

On the shame she experienced after being raped at age 7, and the duality of being good or bad

[The shame comes from] not being able to protect yourself, and then the shame of breaking the rules. When we're children it's sort of cut and dry: You're either good or you're bad. There's not really an in between. And when you are given a message over and over and over and over again, it says, "Don't let anybody touch your private parts. Those are nasty things. Those are fresh things. Those are things that fast girls or bad girls do." And you find yourself in this situation at a very young age. You're either one or the other: You're good or you're bad. And there's a lot of shame attached to that.

It opened my mind up to the idea that, first of all, that this could happen to other people. I didn't even think about other girls. When I read it, I thought, even then, it's just me and Maya Angelou, because this is somebody else that this happened to, and it made me wonder why God would let something like this happen to a good girl. Because in the book, I'm perceiving her as different than me. She was a good girl. She listened to her grandma. She did what she was supposed to do. She did her work. She got her chores. Why did this happen to her? It was such a beautiful thing for me to have that connection. I felt just less alone to have a story in the world that I could even connect to.

I often wonder why this person picked me. It could be something that he saw in my personality. It could be any number of things, but it's all the depravity in his mind, it had nothing to do with who I was as a child or anything that I did as a child. There's been all kinds of research, and we've seen stories, even anecdotal stories of predators telling about how they pick the children that they decide to go after and why. Maybe it's the quiet child, maybe it's the loud child. ... They all have their reasons, but none of those reasons are connected to me, none of them were connected to me being a particular type of girl this happened to, which is what I put in my mind: "I'm the type of girl this happens to." I had to work, go through a whole bunch of steps, to take the blame from myself and put it where it rightfully belonged. Take the burden from myself and lay it at the feet of the people who actually should hold that. That took a lot of work.

I think when you couple the messages that we receive from the world about who we are and how we show up and how we should be valued with this kind of abuse, that it creates this really disturbing mixture of emotions and bad thoughts ... And so I think a lot of little Black and brown girls internalize it, and then we see it come out in anger and behavior and things like that. But nobody tends to ask us those questions about where that came from. So it's just a label, "these little Black girls with these attitudes," "these little angry Black girls." ... We don't get the questions that say, "Well, where did this come from?" ...

This is a child, and children aren't born angry. They aren't born with attitudes. Something has to happen. Something has to have affected them in order to bring that about. Obviously, it's not only sexual trauma, but there is trauma. And knowing that there's so much trauma in communities of color, you would think that the first place that people would go is: "What happened?"

I think generally we've gotten so many messages about what sexual violence looks like and how it shows up in young survivors, in particular, and so we look for the sad girls and the girls who might be cutting or or harming themselves in some way or the girls who retreat from society. And those are also markers. But the overachieving perfectionists, melt-down-at-getting-a-B girls are also going through something. And that's who I was.

21st Century was life-changing from the moment I walked in the door and saw the young people dancing and singing freely to taking these sessions, going to these training sessions where I was literally learning to be an organizer, how to put together a campaign. ... These were the first people to tell me, "You're a leader now." And it allowed me to exercise ... a different kind of freedom to speak up and use my voice and say that my voice was valuable. And so it really just changed how I thought about myself, but also it gave me my vision of who I would be in the future. I had never seen anything like it, experienced anything like it. And I just wanted to be a part of it.

21st Century, the organization, was founded in Selma, Ala., and the founders were veterans of all of the civil rights movement, Black Power movement, labor movement, co-op movement. Like all of these various movements that came out of the '60s and '70s, these social justice movement. And so you're no different than the young leaders in SNCC [the Student Nonviolent Coordinating Committee] in the 1960s — they were teenagers too. And [21s Century] told us stories of movement children, young people, who made a difference. They gave us leadership development, taught us organizing skills and sent us off into the world. I was like, "I have found my calling. This is it." That was my tribe.

Ann Marie Baldonado and Thea Chaloner produced and edited this interview for broadcast. Bridget Bentz, Molly Seavy-Nesper and Meghan Sullivan adapted it for the Web. 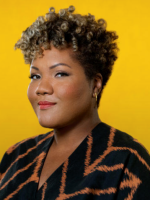