Yola's 'Stand For Myself' First Listen

If you’ve got your ear to the radio, you might have heard three new tracks from Yola in the rotation: Diamond Studded Shoes, Starlight, and Stand for Myself, the title track to her new record, dropping July 30th.

As a relative newcomer to the Nashville scene from Bristol, UK, Yola landed with a bang when her debut LP, Walk Through Fire (2019) netted her four Grammy nominations. The record dealt with ideas of trauma, both emotional and physical: as the chorus of Walk Through Fire goes, Yola literally had to walk through fire as she watched her house go down in flames in 2015. It’s an album that is rich and deeply soulful though a bit mournful, with its eyes on the past.

It was a sort of excavation, if you will, of her voice under the ‘Easy Eye’ (see what I did there?) of Black Keys frontman Dan Auerbach, who assembled all its collaborators, including Molly Tuttle and Vince Gill and produced it at his Easy Eye Sound studios here in Nashville.

Stand for Myself is a departure from this as it marks a new era of artistic agency for Yola. She recorded it, once again, at Auerbach’s Easy Eye Sound, but she culled her collaborators, making sure to hire writers and musicians of color. The album is an anthem of the power of Black female growth, indeed, thriving in one’s skin, and the act of having your own back. With its amalgam of country-soul and – dare I say – danceable pop, Yola’s voice is in full display on Stand for Myself, and evident in every brilliant beat.

If this were the 90s, I’d tell you to run to the nearest Tower Records at the break of dawn on 7/30 and get yourself a copy of Stand for Myself. But it’s not the 90s, the Tower Records on West End is definitely a hotel now and this is noncommercial radio so I’m technically not allowed to tell you to buy anything.

But seriously, get your hands on Stand for Myself for some sonic joy. You’re welcome. 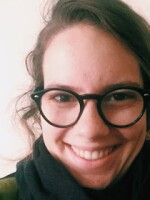 Kate Scott
Kate Scott hosts WMOT Morning music every weekday from 3-6am, and is a contributor to Liner Notes.
See stories by Kate Scott
LATEST STORIES