Love Over Everything - The Story Of The Bird And The Bee

I wanted to find a story about peace and love to share with you this holiday season. I was thinking of an album or song that conveyed a message of hope and living in harmony. A former colleague who is a long-time music executive, and now author told me about a children’s book called The Bird and The Bee. Jonnie Forster manages Nashville based country artist Willie Jones, who has contributed a song to the soundtrack for The Bird and The Bee . The full soundtrack is still in the works, but Forster and Jones got together in Nashville recently to talk about the soundtrack and Forster told us how the story idea started as a motion picture and ended up a children’s book with these beautiful illustrations.

The story follows Herbie the Hummingbird and Bree the Princess Bee on their quest to change the world, while teaching lessons of acceptance, teamwork, open-mindedness, environmental consciousness, and love. Forster was first inspired to write the story shortly after his wedding twelve years ago; he was raised Jewish in New York and his wife Kamilah is part Native American and African American. One day as he was sitting in nature observing a hummingbird and a group of bees feeding on flowers and peacefully co-existing, he began thinking about how remarkable it was to witness these two very different creatures enjoying nature side by side in harmony. The idea for The Bird and The Bee was born. After the birth of Jonnie and Kamilah’s daughter Ivy and during the height of the pandemic, he finally sat down to write the story of Herbie, a long-nosed hummingbird (Jonnie) who falls for Bree, the future Queen of the hive (Kamilah).

The illustrations help to tell this story of love over everything. The artist that created them is Yuliia Lestes, a previously unknown and unpublished Ukrainian illustrator. Forster, also of Ukrainian descent, had searched the internet looking for artists and was drawn to her work. The book proved to be a much-needed outlet for Lestes, helping her switch off her brain from the situation in her country. She explained, “When I worked on the illustrations, I forgot about everything going on around me.” With the money she made from working on The Bird and The Bee, Lestes was able to flee the war in her beloved country and relocate to the Czech Republic where she and her brother currently reside. She recently created this image of Bree and Herbie celebrating the holidays. 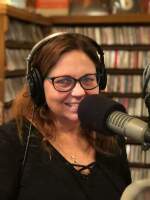 Ana Lee
Ana Lee is the host and producer of "The Local Brew," a weekly radio show plus a live showcase for Nashville based artists. She hosts mid-days on 89.5 WMOT Roots Radio, Nashville, is a voice over artist and curator of musical experiences for events.
See stories by Ana Lee
LATEST STORIES
Related Content